Hello. I'm one of the co-founders of Pure Adapt, Inc, located in Albany, NY. Our primary business is Detailed Image, an online retailer of high quality car care supplies. We do almost everything in-house: design, programming, marketing, inventory management, warehouse operations, and more. Since our inception in 2006 we've bootstrapped all of our growth internally. No outside funding, just hard work and reinvesting profits.

I spend most of my days programming for Detailed Image, analyzing data, and overseeing our web marketing initiatives. But like a lot of business owners I also spend quite a bit of time on HR, customer service, and anything else that's needed. I have two partners, Mike and Greg, who do a tremendous job managing the other aspects of the business.

We've operated from our warehouse in Guilderland Center, NY since 2008. It started out as a 5,200 sq-ft space, which we then expanded in 2016, 2019, and 2021 to over 22,000 sq-ft to accommodate our growth. We have an exceptional staff of full-time employees, part-time employees, and contractors that help make the magic happen. Every day we strive for fantastic customer service, a great website, efficient warehouse operations, a strong culture, and building a company for the long haul.

The Albany Business Review named us one of the Best Places to Work in the Capital Region. Our salaried employees and our hourly employees receive their health insurance premiums paid in full, paid time off, and matching contributions to our retirement plan. We were also named to their list of the Fastest-Growing Companies in the Albany area from 2016 to 2019. And for five straight years from 2015 to 2019 we were named to the Inc. 5000, a list of the fastest growing private companies in America.

Community involvement is important to us. For over 10 years we have offered college scholarships to students of Colonie Central High School through the South Colonie Dollars for Scholars program. I've guest lectured on entrepreneurship at several universities, including SUNY Albany and James Madison, where I co-taught a Web Venturing class to seniors.

I'm originally from Albany. I attended Rensselaer Polytechnic Institute (aka RPI) in Troy, NY and graduated in 2004 with a degree in Industrial & Management Engineering. After college I worked for the razor company Schick in Milford, CT as a quality control engineer in their R&D department for a year before leaving to pursue my own ventures. At the time I had a growing sports collectibles site SportsLizard.com. In early 2006 I left Connecticut and by the end of the year I had connected with my partners to form Pure Adapt.

What I'm currently working on

We're in the process of improving a lot of the infrastructure on Detailed Image. We have legacy code and systems dating back to 2007. Now is the time to make improvements to ensure that we can have a modern, fast, and secure site for another 15 years.

We launched Notify My Team in early 2021, but didn't give it the marketing attention that we had planned. It works great for us internally and we have some really good paying customers. Now is the time to see if we can grow it into a business.

In 2019 I started working on an exciting software project. Then the pandemic derailed our plans. I'm hoping to get back on track and launch a demo in the near future.

We recently completed an entire overhaul of our system for quoting shipping rates during checkout. Unlike (literally?) every e-commerce store I am able to study, including major platforms like Shopify, we were not pulling shipping quotes in real-time directly from shipping providers (USPS and FedEx in our case). Originally we did this, but a prolonged FedEx outage on Cyber Monday in 2014, combined with a slower checkout experience while waiting for the rates to load, led us to reconsider our system.

At the time, we decided to "reverse engineer" FedEx's rate quotes and build our own rate quoting system that regularly pinged the API for rates by zip code range and then adjusted for DIM weights, surcharges for residential or rural delivery, and the like. When we added USPS in 2015, we did the same thing.

The system served us well for years, but eventually became unsustainable during the pandemic. The code was already complex, the database tables were massive, and yearly updates were difficult for me and impossible for anyone else. But then both providers started updating their rates and surcharges and formulas much more than once per year for peak time periods and sometimes "just because."

There was also the major downside of lock-in. Adding another service like UPS or DHL or LaserShip would have been extraordinarily difficult because we'd need to first reverse engineer their system as well.

At the same time, my big initiative right now is modernizing and simplifying our 15+ year-old platform to set us up for success in the next decade.

So last year I started working on a system to replace our custom system. The upsides are clear: less code, simpler maintenance, more accurate rates, the ability to add other providers relatively easily. The downsides are also clear: slower load times and reliance on multiple 3rd party services at a critical stage of checkout.

I overcame the biggest hurdles by progressively loading the checkout page - meaning that most of the page still loads immediately, and then 1-2 seconds later the shipping rates and totals fill in - as opposed to waiting for the rates to load first. I also utilized cURL multi-handles in PHP to allow for asynchronous API requests - FedEx and USPS at the same time instead of FedEx first, then USPS as most code would execute - which not only speeds up times now from 2-4 seconds to 1-2 seconds, it allows for multiple services to be added in the future without any loss in speed. And, most importantly, if rates aren't returned within 3 seconds we load rates from a backup system, which is a significantly scaled back and less-accurate version of our prior system, while still being reasonably accurate for our most popular services.

I estimate that the new code base is about 10% of the old system, we'll be able to slim down the database by about a dozen tables, and I was able to eliminate several automated processes that ran all day long on the server.

This week, after almost six months of work, the entirety of the new system went live. So far I'm thrilled. It's working great, our customers should barely notice (I can barely notice even when I'm testing and paying attention to page speed!), and it sets our business up for shipping success in the coming years no matter how we change or the industry changes.

A Smarter Approach to Black Friday

For over a decade Black Friday and Cyber Monday were a celebration for us. We'd set sales records. We'd take photos of the towering piles of packages. We'd work weekend shifts and have weekend pickups to make sure everything got out the door on time. I'd often write a blog post celebrating all of this.

As our business has evolved and retail in general has scaled back and spaced out the holiday shopping season (remember when stores would open on Thanksgiving?), we've adjusted our approach to similarly be a little more measured, a little more balanced, a little less chaotic.

Our volume has grown disproportionately in our spring and summer peak season, meaning a huge spike on Black Friday is out of the ordinary for the fall/winter and also less necessary. By starting our promotions earlier and dialing back the biggest ones (in particular combining huge discounts with free shipping), we've solved a bunch of problems all at once.

While our customers still get great deals, we're no longer shipping a ton of volume at low margins. We don't need to staff up, work late, work weekend shifts, or coordinate weekend package pickups. We also don't need to overstock inventory heading into a slower period over the winter.

The result is that we can all enjoy our holidays and set up the business for greater success heading into the winter and next year's peak season. 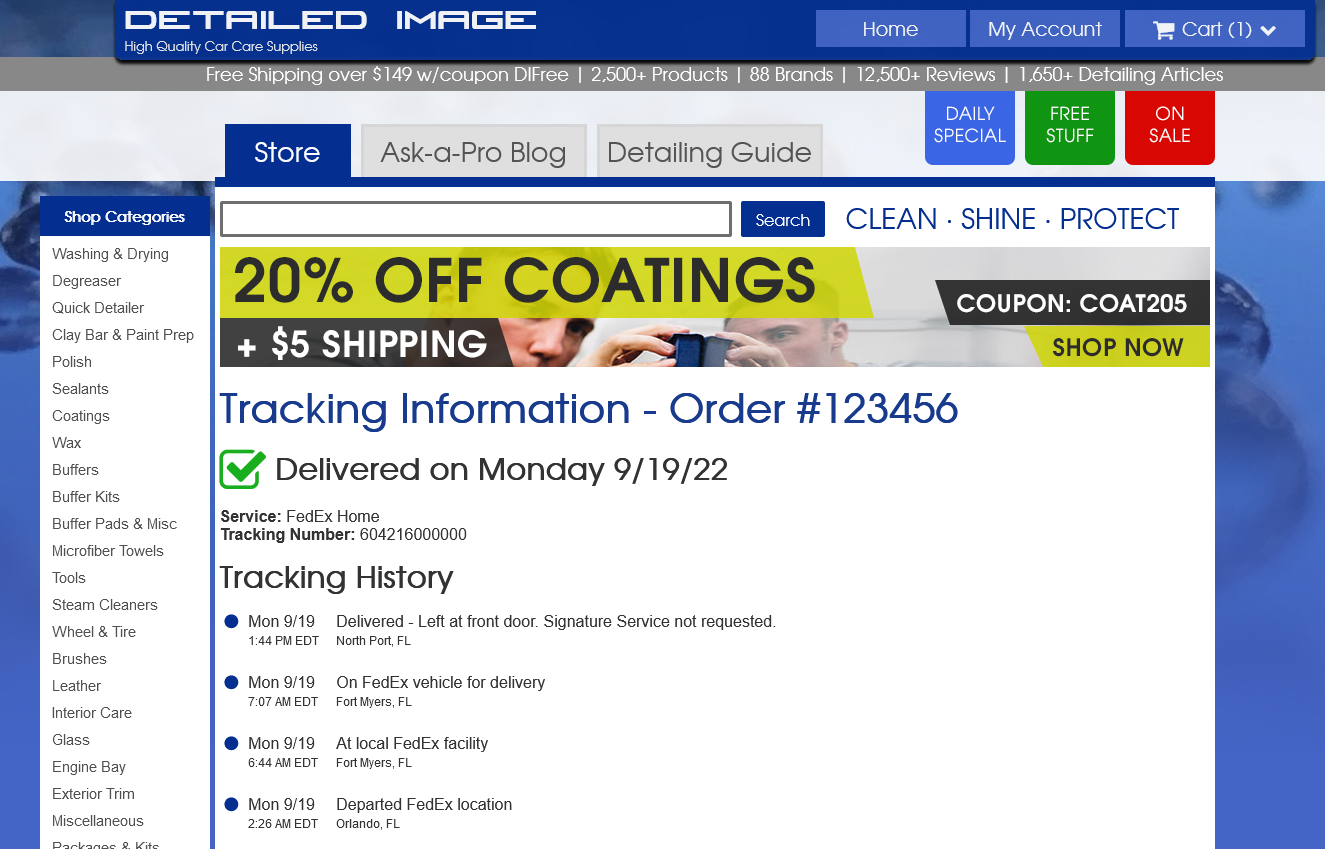 We recently launched a really nice feature for Detailed Image's shopping cart that filled in some holes in the customer experience and greatly improved our internal shipping data. We're now tracking the status of packages after they leave our warehouse using the FedEx API and USPS API.

Previously, our shopping cart's interaction with a customer's order ended after it was shipped. We'd send them an email with a link to the tracking number on FedEx.com or USPS.com. Their order status pages would show "Shipped" with the tracking number, and that would be the end of it.

Over the years it has become more common place to manage tracking and delivery information on the retailer's site (or using a third-party like Narvar).

Our system now checks on undelivered orders every few hours and updates the latest status and a few other details in our database, which enables us to do a bunch of cool things:

We all shop online a lot. This was one of the few things lacking in our core shopping experience that we all felt we needed. When we mapped out the project and saw just how many "wins" there would be, it became much more of a priority.

One of the things that I've noticed about our business lately is that we're spending quite a bit more time on "defense" these days than on "offense". The result is that we haven't really had any exciting announcements this year, but it doesn't mean that we're not doing great work.

On the tech side of things, we've been adding more sophisticated layers of security to our website to improve how fraudulent purchases/attempts are handled. As the person who usually responds to those types of issues, automating these systems has become a top priority for me over the past two years so that I can spare myself the on-call work.

Internally, we've taken steps to secure our workflows and migrate much of the team over to Chromebooks, which pair well with our Google Workspace account.

We've seen this in other areas of the business too: HR policies, accounting precautions, and insurances have increased in importance.

I'm pretty agnostic about this type of work: I'd be lying if it's as exciting as developing a brand new idea, but it's also satisfying in its own sense because you're protecting all of your hard work, protecting your employees, reducing future headaches, and hopefully reducing the chance of some catastrophic event crushing your business.

Still, you can see how "playing defense" all day can lead to a different type of business threat. You become susceptible to competitors playing offense, you miss out on changes in the market while you're playing defense, or your offensive skills become rusty.

So as we enter the second half of 2022 reasonably caught up from the two-year chaos brought on by the pandemic, I'm hoping that we can strike a healthier balance between the two and start playing a little more offense.

Where is your blog?

I wrote over 1,000 blog posts on this site between 2005 and 2021. If you took the time to read those posts, thank you! I have all of the blog posts and may republish them in the future.

I decided to replace the blog with this simple website. I built a very basic publishing platform that enables me to post short updates to this page and have them published to my RSS feed. Some updates will also post to my entrepreneurial timeline dating back to 2003, which I preserved from the old site.

You can get in touch on Twitter, LinkedIn, or by emailing adam at this domain.